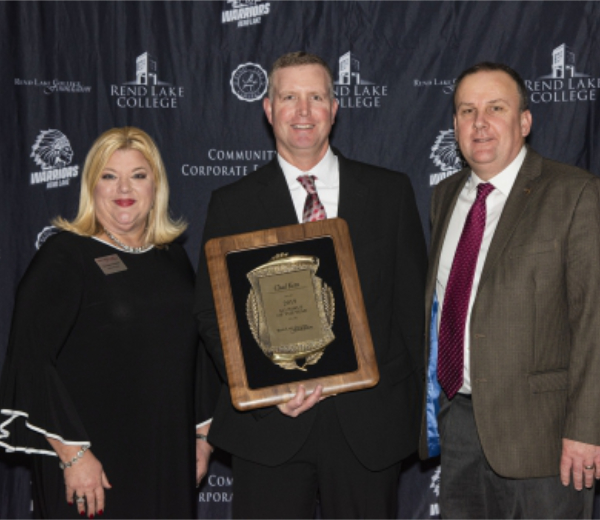 Chad Kern, CEO Schirm USA, has been nominated for a special award. The Rend Lake College (RLC) Foundation in Ina in the state of Illinois is honouring him with the “Alumnus of the Year 2019” award because of his great services during his time at the college and beyond as an “ambassador” of the Faculty of Agriculture. Chad Kern accepted the award in person during a festive event at Rend Lake College in Illinois on 5 December 2019.

Kern began his academic career in 1991 by studying at the RLC and completed his degree in the field of agriculture mechanics in 1993. He then moved to the Southern Illinois University (SIU) in Carbondale and successfully completed his studies there to gain a Bachelor of Science degree in agriculture.

+As a member of the “RLC Agri-Achievers” association, Chad has been involved in promoting the agriculture department at the RLC both internally and externally on a voluntary basis and has attended public events too. His involvement did not come to an end when he moved to the university either. He joined the “Agbassadors” (i.e. agricultural ambassadors) there and continued his voluntary work. He made a strong impression on fellow students and new students, in particular. Chad Kern showed great leadership qualities back then, as he still does, and has therefore been nominated for the “Alumnus of the Year 2019” award at the RLC.

Chad Kern, CEO Schirm USA, adds, “A community college like the RLC offers young people very many opportunities. They can get used to college life and discover the pathway that they wish to pursue later before they begin their studies at a university. I’m very proud of my early days at the RLC, which have accompanied me throughout my ongoing career. This award is a great honour for me.”

Chad Kern has been working in the chemical industry for more than 20 years. He has been employed at the Schirm business site in Ennis/Texas for 11 years. During this time, he has held various positions with responsibility for purchasing or EH&S and has worked as the lead engineer and the facility construction manager. Kern took over the position of CEO of Schirm USA, Inc. on 1 August 2019.