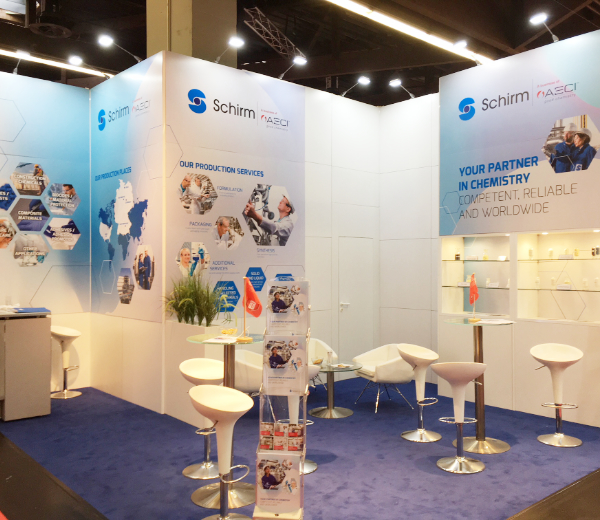 The team from Schirm GmbH attended two international trade fairs in the spring of 2019. Our experts from the development, chemical synthesis and process engineering departments held many discussions and presented the company with its individual solutions as a production service provider for the chemical industry to a broad professional audience.

This year’s European Coatings Show on 19 – 21 March 2019 set a new visitor record: 30,500 people attended the event and the 1,156 exhibitors came from 46 countries. As a result, the European Coatings Show was once again able to underline its reputation as the leading international trade fair for the production of paints, varnishes and sealants.

Dr Karsten Mielke, Senior Manager Business Development at Schirm, commented: “This year’s European Coatings Show was a complete success for Schirm. We held discussions with as many as 100 people on the three days of the fair, some of them with existing contacts, but also with potential new customers. Many of the visitors were particularly interested in the production services for chemical synthesis and process engineering for finishing solid substances and liquids.”

The exhibitors and trade visitors travelled to Nuremberg from six continents to exchange ideas about the complete process chain for manufacturing paints and varnishes. The exhibition space was expanded to include eight halls on this occasion.

Grinding, sieving, mixing, conveying, dosing and granulating: the 21st Powtech fair was also held in Nuremberg on 9 – 11 April 2019. The world’s leading trade fair for powder, granulate and bulk material technologies reflected the current state of mechanical process engineering and analytics. A total of 824 exhibitors from 35 countries presented their innovations in six halls at the Nuremberg trade fair site.

Dr Karsten Mielke was very happy with the response at this exhibition too: “The Powtech is one of the most important trade fairs for Schirm every year. We’re delighted that we were able to make many new contacts. The numerous lectures at the specialist forums, also with a focus on chemistry, completed the excellent trade fair programme and communicated interesting and particularly new scientific findings.”

Schirm has already made firm plans to attend the following events and looks forward to seeing you again in Nuremberg. The 22nd Powtech takes place on 29 Sept. – 1 Oct. 2020. The next edition of the European Coatings Show is planned for 23 – 25 May 2021.